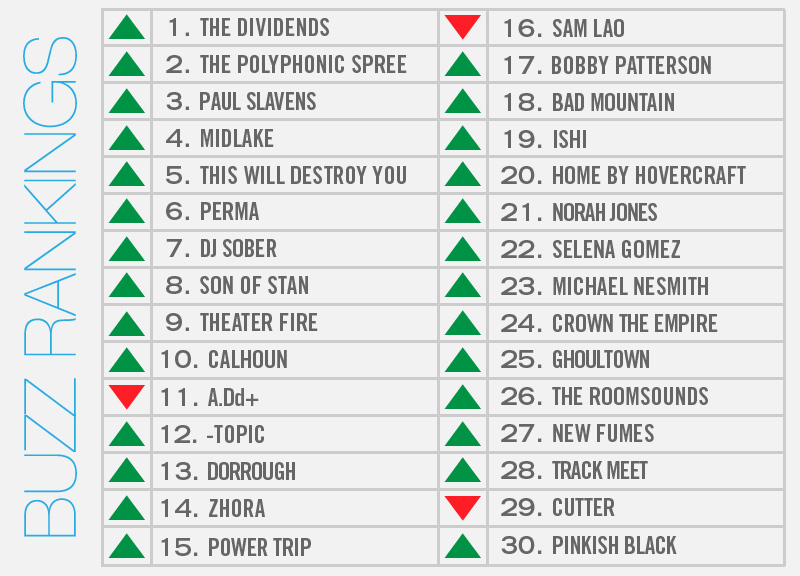 This Week, The Dividends' Eminem Collaboration Really Paid Off.

Less than 24 hours after we pointed out how impressed we were with the fact that Eminem's upcoming The Marshall Mathers LP 2 had yet to leak, the damn thing went and leaked.

Oh, well. We're not complaining. The early look at the album gave die-hard Eminem fans and curious local music devotees the first look at The Dividends' work on the album's opening track, “Bad Guy.” Co-written by the group's Symbolyc One and Sarah Jaffe — and featuring Jaffe's distinctive vocals on the hook — the track also marks the first full song we've heard in full from the group.

Whether or not Jaffe ends up blowing up as a result, the song, at least for now, did serve to earn some tremendous shine for The Dividends — especially locally. While, individually, the group's members have combined to earn the top spot in our weekly Buzz Rankings nine different times, this marks the first time The Dividends have officially landed the No. 1 position.

Not far behind is The Polyphonic Spree, which has a busy week ahead. This weekend, the group, already known for its annual Christmas offerings, will throw its first Halloween Hootenanny. Aside from firmly cementing the group as the celebratory holiday band in town, the November 2 affair at Lakewood Theater will also mark the first time the band will perform its world renown Rocky Horror Picture Show cover set in front of its hometown crowd.

The Spree will also headline this year's 25th anniversary edition of the Dallas Observer Music Awards ceremony at House of Blues. But, first, 60 or so of the bands up for Observer awards will perform as part of that paper's showcase event, which will take place across eight stages throughout Deep Ellum this Saturday. Looking ahead to these two events, Paul Slavens — one of the very few artists nominated for the first DOMA 25 years ago and also a nominee this year — penned a feature story for the paper looking back at how the local music scene has evolved over the past quarter-century.

Cover photo of The Dividends by Dennis Webb.