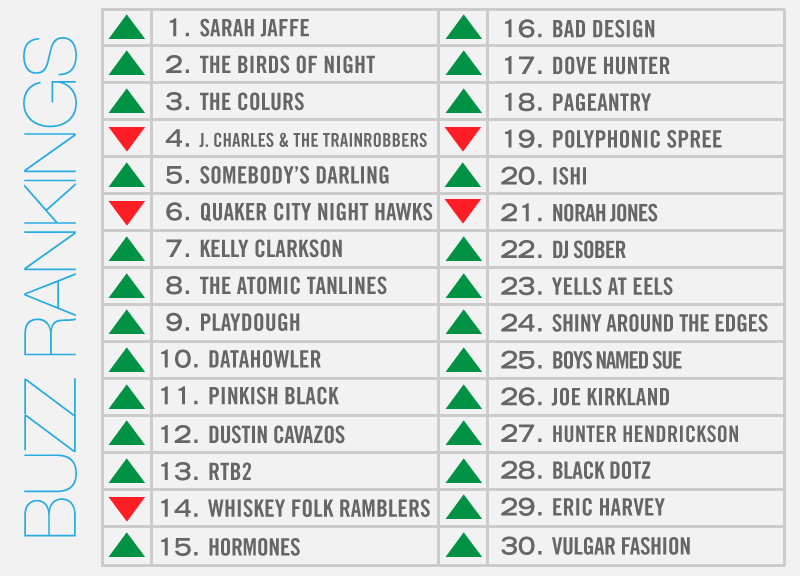 We Get It. You Guys Really Like Sarah Jaffe.

Tonight, the AT&T Performing Arts Center's weekly Patio Session series in the Arts District will come to a close on quite the high note: Local darling Sarah Jaffe, who also recently played the Dallas City Performance Hall's grand opening, will perform this evening (weather permitting, we imagine) at Sammons Park. It's a pretty rare opportunity to catch the popular songstress for nothing — especially when one considers that the Pearl Cup once charged $22 for an opportunity to watch Jaffe perform at one of their coffee shops. So it's no wonder that Jaffe takes the top slot this week.

More surprising is the fact that the retro-tinged The Birds of Night fly all the way to No. 2 this week. The Denton trio has a busy week ahead of them, opening at Saturday night's Crocodiles show along with fellow buzzing Denton act, Pageantry. Furthermore, it was recently announced that, as part of the Sundown at Granada's new strategy of adding free live music seven nights a week, The Birds of Night will perform on Halloween night. That new era at Sundown actually kicks off tonight with a somewhat rare performance by Boys Named Sue. Other weekly residency slots will be filled by The Effinays, Whiskey Folk Ramblers, Ryan Thomas Becker & Friends and Phil Pritchett.

Meanwhile, local alt-country powerhouses J. Charles & The Trainrobbers and Somebody's Darling continue get some shine this week from their recently released albums. And last week's No. 1, Quaker City Night Hawks, has received a ton of love as of late thanks, in part, to having songs appear in back-to-back episodes of Sons of Anarchy.

In other news, North Texas expat Kelly Clarkson revealed the cover art and track list for her upcoming greatest hits album late last week, receiving some national attention from the news — albeit not as much as she did after mentioning in an interview with UK's Daily Star that, although she's a republican at heart, she would be voting for Barrack Obama in the upcoming election because of Mitt Romney's stance on gay marriage. Also on the national front: Joe Kirkland, a fellow North Texan hoping to join Clarkson as the winner of a reality television singing competition, furthered his chances of achieving that goal as he survived the first “battle” round on this week's episode of The Voice.

Lastly, just as it did last week, The Observer heaped a whole bunch of shine on local artists this week, publishing profiles on several more bands nominated for this year's Dallas Observer Music Awards. Among the artists highlighted this week were The Atomic Tanlines, Pinkish Black, Dustin Cavazos, Bad Design and Hunter Hendrickson. One of last week's profile subjects, Playdough even earned a cover for his profile, and he'll perform at the Prophet Bar tomorrow night with J. Rhodes. Both artists are currently supporting new releases.