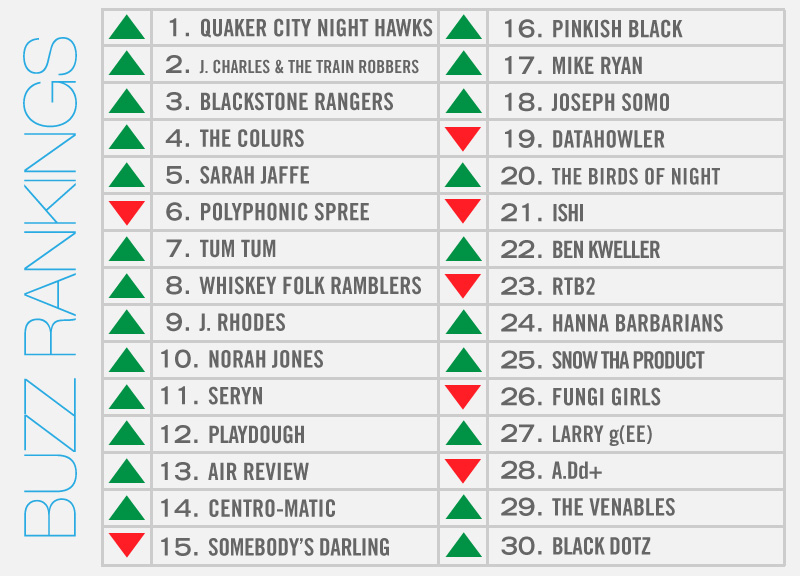 Only months after forming, Fort Worth's Quaker City Night Hawks recorded their very well-received debut Torquila Torquila!. But, with another year of playing time under their belt and a sophomore album on the horizon, it seems as if even bigger things are ahead for the Funky Town rockers. Case in point: A pair of cuts from their first record are currently airing in back-to-back episodes on FX's biker drama Sons of Anarchy. Also, we debuted one of their new tracks earlier this week.

Following the Night Hawks in both this week's rankings and their Good Records set this evening are J. Charles and the Trainrobbers, who released their new full-length, Upon Leaving last weekend. Since then, they've kept busy promoting the album with several appearances, including one at Goodfriend's one-year anniversary party last night.

Both Quaker City Night Hawks and J. Charles and the Trainrobbers are nominated for Dallas Observer Music Awards this year, in the Best Group Act and Best Americana/Roots Act categories respectively. To further promote their ceremonies, several other nominated artists were profiled on the Observer's DC-9 at Night blog this week, including The Colurs, Snow Tha Product, My Wooden Leg, Mora Collective, Joseph SoMo and Tum Tum.

Several national acts with Dallas ties are performing in town this week as well: Norah Jones performs at McFarlin Auditorium, Ben Kweller will be at The Kessler and Centro-Matic opened for the Afghan Whigs at Granada Theater last weekend.

Not to be forgotten, the Polyphonic Spree continue to raise funds for their currently in-progress studio LP via Kickstarter while prepping for their performance next weekend to commemorate the opening of the city's new Klyde Warren deck park.

Also making their live debut this week are Dallas' newest cover band, The Venables, a Smiths-aping act who are performing on an '80s tribute bill at House of Blues alongside Cramps cover band The Gorehounds and Ishi, who will be performing Depeche Mode tracks exclusively. The Venables features KDGE program director Josh Venable on vocals, as well as Glen Reynolds and Matt Kellum of Chomsky on guitar and drums (respectively), Michael Rudnicki of Baboon on guitar and Daniel Reid Long from Long Sword Spectacular on bass.