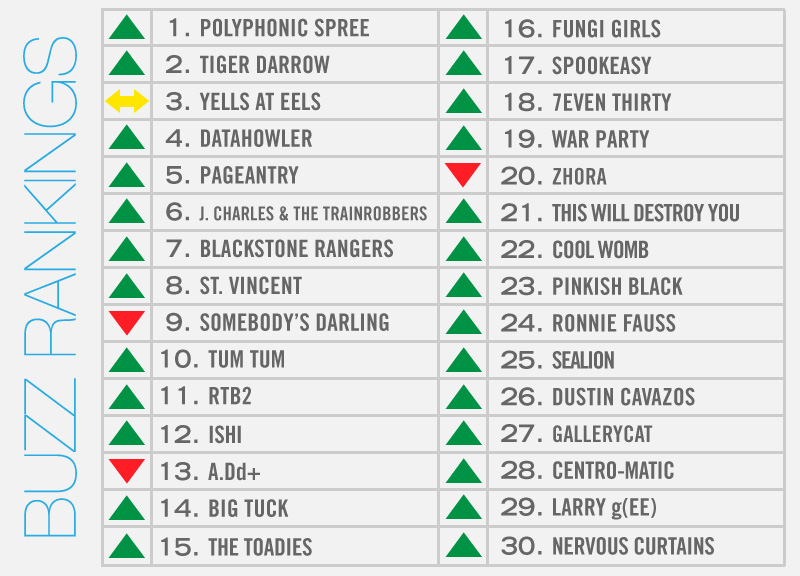 The Deck Was Stacked In Polyphonic Spree's Favor This Week.

For the past two years, motorists traversing Woodall-Rogers Freeway have had to put up with construction.

Later this month, both of these sets of individuals will learn if all the trouble has been worth it.

In a few short weeks, the recently-dubbed Klyde Warren Park will host 10,000 North Texans as part of its grand opening events. While roughly 4,000 of those tickets to attend the gathering have been held back for sponsors, donors and media types, the other 6,000 went up for grabs on Tuesday morning.

The tickets — which will reserve a spot to catch sets by Trombone Shorty and the locals in The Polyphonic Spree — were all snagged in less than an hour. From what we've read, in fact, it might have even been more like 30 minutes.

As excited as folks surely are about the park, it's a pretty safe bet to assume that Polyphonic Spree's participation in the festivities also played a sizable role in garnering such buzz for the event.

In other Spree-related news, the plus-sized indie outfit also launched a Kickstarter campaign to help fund a live album and concert DVD as well as a new full-length studio album. As part of their campaign to raise $100,000, they've made available incentives like sitting in with the band for a show, having your band open for the Spree and hosting a concert by the band in your living room. It's no wonder, then, that the band has already managed to raise over $15,000 in pledges at the time of this posting.

Close behind the Spree in buzz-garnering this week was North Texas product Tiger Darrow, who is currently living in New York.

A video that Darrow, now a student at NYU, starred in called “Hipster Disney Princesses” recently went viral, accruing over 1.5 million hits since it was posted a little over a week ago.

Meanwhile, Datahowler and experimental jazz trio Yells at Eels played to nice crowds at last weekend's much buzzed about Index Festival and local ex-pat St. Vincent's performance with David Byrne is being hailed as one of the year's absolute best. Of course, the pair's incorporation of a large horn section, extensive choreography and a somewhat surprising Talking Heads cover will make their recent show at McFarlin Auditorium understandably hard to top in that department.

In other news, Dallas alt-country favorites J. Charles and the Trainrobbers will be holding a blowout at Dada this Saturday to promote the release of their new full-length, Upon Leaving. The whole affair will feature nine acts performing on two stages. Similarly, their peers in Somebody's Darling are still riding high off of their recently-released LP, which was celebrated with a show at Dada last Saturday.