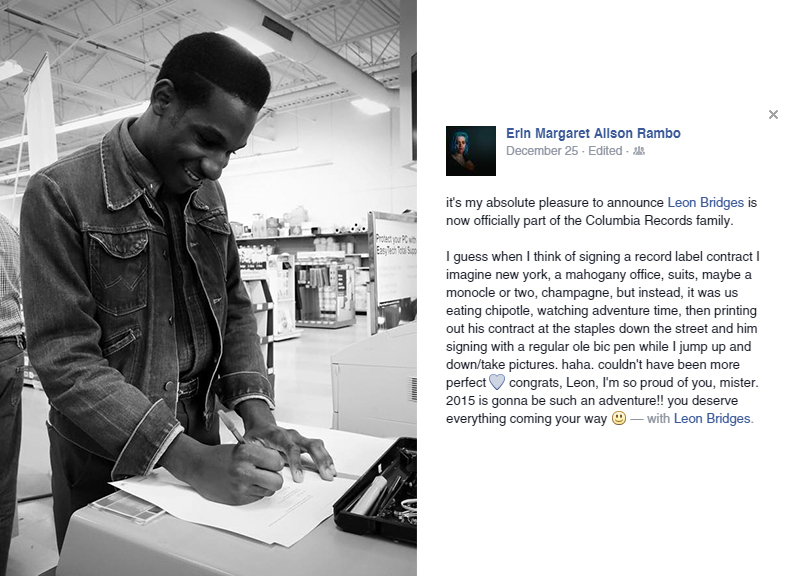 Well, we all should've seen this coming.

But it made for a nice little Christmas morning treat just the same: On December 25, the recently buzzing, Fort Worth-based retro crooner Leon Bridges made it publicly known that he'd signed a record deal with Columbia Records.

It's a real honor to now be a part of the @columbiarecords family. Been a long time comin'. Cheers to a good one.

Is it deserved? Hell yeah, even if the signing — reportedly a two-record deal — seems to come on the strength of just two (!) tracks posted to the web. Still: Those are some solid songs. And, at the time of this writing, Bridges' two Sam Cooke-aping cuts have been played more than 830,000 times already.

Perhaps more uplifting than the tale of this Fort Worth crooner “making it” is the way in which he did, as explained by his friend, photographer Erin Margaret Alison Rambo, who says it went down with a Bic pen, at a Staples, after an Adventure Time marathon over Chipotle burritos:

Your next chances to see him live? First up, you can find him at the Prophet Bar on New Year's Eve with RC & The Gritz, Picnictyme, -topic and more. After that, catch Bridges on January 17 at Trees with Beach Fossils, Appleseed Cast and many more at the Have a Heart Benefit.