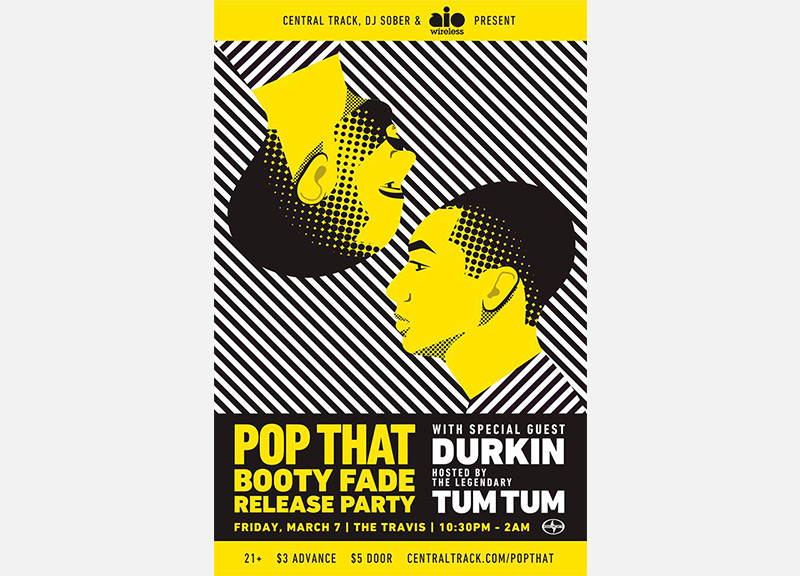 Booty Fade, Tum Tum and Durkin to Join Forces at Our March Pop That Bash.

The cat's already out of the bag on this one, but we're still gonna hip it to you all the same:

After last month's hugely successful bash featuring a reunited The Party, Pop That will return on March 7 in a new home, with a new cast of characters and a whole lot of added bonuses.

First things first: Yes, we've got a new home for the bash this month. As opposed to each of our previous affairs, all of which went down at the It'll Do Club, this next Pop That will go down in the gorgeous upstairs confines of The Travis.

And, boy, will we have a show for you there: Booty Fade, the collaborative and undeniably rad collaboration between Picnictyme and our own Pop That collaborator DJ Sober, will headline the affair, which will double as that group's debut, self-titled EP release party.

Legendary Dallas emcee Tum Tum, whose “Caprice Musik” Booty Fade sampled for its new “It Goes Down” track, will also be on hand, hosting the bash.

Meanwhile, Boston-based DJ and producer Durkin will be on hand, too, setting the table for Booty Fade's set with a sure-to-be-alluring offering if this below mix he put together for Mad Decent is any indication (and it should be).

Also? Our pals at Aio Wireless and Scion A/V will be up in the spot, handing out free goodies of their own.

Tickets to the party are $3 in advance or $5 at the door. Get your advance passes and guarantee entry right here.

And, while you're at it, let us know you're coming here on Facebook, too.