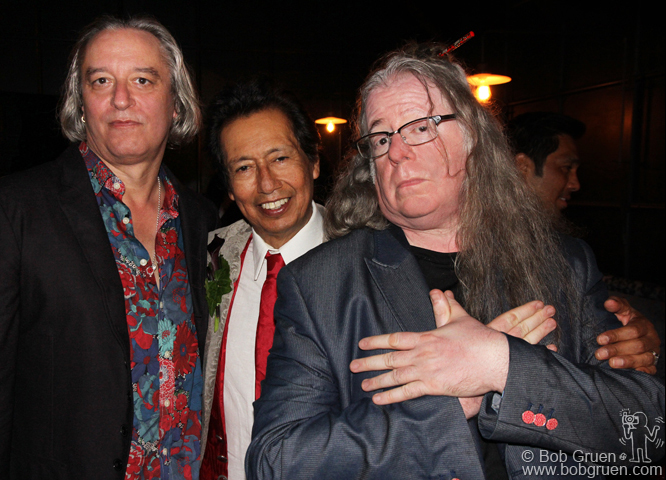 Bucks Burnett is a known provocateur. And, hell, as the mind behind the ever-curious Eight Track Museum and the only musician in the room with the guts to call his style “the Dallas sound,” he's arguably Dallas' greatest.

But it's his next trick that just might be his most mind-blowing to date: Burnett has somehow convinced Alejandro Escovedo, R.E.M.'s Peter Buck, The Minus 5's Scott McCaughey, and the Talking Heads and the Tom Tom Clubs' Chris Frantz and Tina Weymoth to join his latest band, The Almost IV. (Noted Dallas music veteran Paul Averitt rounds out the seven-piece.)

To answer your first question: Yes, really. Yes, all of 'em.

As for the natural second: Well, the details are little blurry — such is the case with most everything Burnett does — but the gist of it is that Burnett's more than just one of those music superfans who will stop at nothing to meet his idols; he's also interesting enough of a guy to the point where these musicians actually want to stay in touch with him after that first meet.

It's a great ploy. He kind of tricks these people into being his friends — and, eventually, his collaborators.

When Burnett opened his Eight Track Museum in 2011, Frantz and Weymouth were there as the guests of honor. (Burnett, interestingly enough, also serves as the couple's official archivist.) As for Escovedo, Burnett first met him during a gig at the long-gone Fast & Cool venue on Lower Greenville in 1982 and has remained in touch since. With Buck and McCaughey, Burnett was such a fan of the Minus 5 that he somehow convinced McCaughey and the R.E.M. guitarist to let him help them pen a collection of four Monkees-themed tunes for their band's five-LP Scott the Hoople in the Dungeon of Horror release from last year.

Turns out, Burnett's deep appreciation of the Minus 5 is the genesis for this new group, too. A few months back, Burnett came up with the idea of forming a Minus 5 tribute called the Almost IV. On a lark, he asked Frantz, Weymouth and Escovedo to join. When they all agreed, he hipped Buck and McCaughey to the news, only to find out that they too, much to Burnett's surprise, wanted in.

In turn, the idea of being a straight Minus 5 tribute has gone out the window. Instead, Burnett says, the Almost IV is now meant to be something more than that.

“We've come from the future to pay tribute to the Minus 5,” Burnett explains. “We've come back in time to show them their future hits.”

Bizarre? Perhaps. But that's Burnett. And now, the 55-year-old says, it's also his burden.

He'll have time to do that: As of now, the Almost IV has only started work on a single track — a cover of Ronnie Lane's “Kuschty Rye,” with each of the band's members recording their parts remotely and sending along updates via email. It's a process Burnett equates to a “you put your pancake on top of my pancake” method, but one that will have to do given his new bandmates' schedules.

“There are people in this band that have never met other members of this band — and may never will,” Burnett says.

Of course, Burnett hopes that's not the case. There are tentative plans for the band as a whole to meet up and record some tracks face to face — maybe in New York, maybe in Austin or maybe even here in Dallas — but Burnett's not trying to count his chickens too obsessively until they hatch.

“The plan is we're trying to keep things simple,” he says. “We're all co-writing. We're all contributing. We're a bunch of teenagers starting a garage band.”

Well, a little more than that, based on the iconic resumes included here alone. It's just that, first, Burnett wants to see the band keep up with its recording. He says he hopes to have an album — or, more likely, an EP — worth of material recorded by spring. Then, after that? If he's dreaming, there'll be a live performance from the Almost IV, too.

Hey, it could happen. Burnett's pulled off greater feats. It's what he does. It's how he got this ball rolling in the first place.

He's a magician, really. Even if he doesn't want to admit it.

Asks Burnett aloud, perhaps not rhetorically: “Just to mix a guy from REM with the Talking Heads alone? And then you throw in Alejandro? I mean, who cares about me?”