Something Old, Something New. 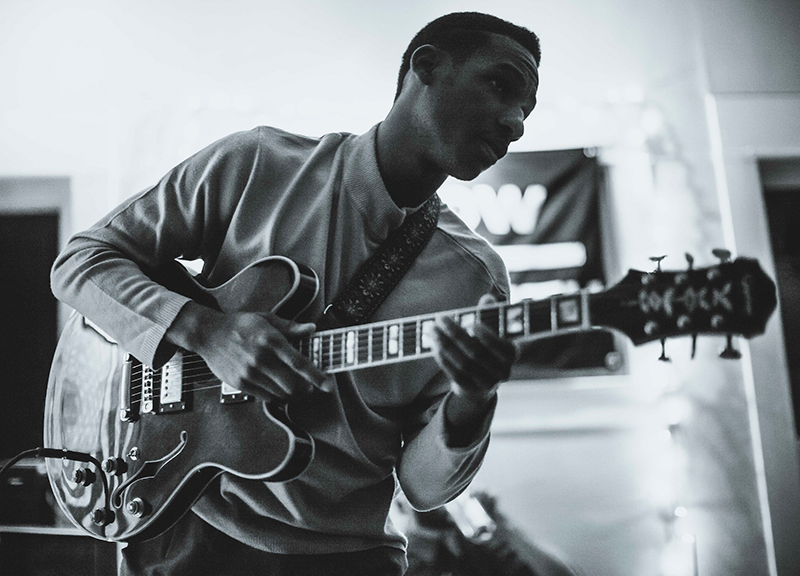 We’ve Been Calling Leon Bridges The Next Big Thing For Months. Now We’ve Got Proof.

All it took was a single song. And, right then, we knew: Fort Worth crooner Leon Bridges is the truth.

It was back on August 2 at Three Links. Bridges, cradling a guitar but otherwise standing up on the stage all by his lonesome, had been tasked with opening up a show also featuring Wesley Geiger and Whiskey Folk Ramblers. The night’s attendees were still entering the room at this point, milling about the place restlessly as crowds at these early hours tend to do. But where most audiences of this ilk tend to be chatty, this one wasn’t. Bridges, dressed like he’d been transported from the late ’60s, had silenced the place.

His soul-tinged material bore a bittersweet taste. It also bore an unmistakable authenticity — not to mention a more-than-passing resemblance to Sam Cooke’s most heart-wrenching cuts.

Later that week, we couldn’t contain ourselves: In a short preview of Bridges’ following performance — alongside the Texas Gentlemen at Fort Worth’s Live Oak Music Hall — we stuck our necks out and wrote that “he just might be North Texas’ quote-unquote Next Big Thing.”

Months later, we stand by that sentiment. And we’re not the only ones, either. Five times now, Bridges has popped up in our Buzz Rankings feature that keeps track of North Texas musicians’ weekly moves. It’s not just our own fandom that’s got him there, either. We can nary run into any musician with Fort Worth ties these days without talks eventually heading toward effusive praise of Bridges’ sound and aesthetic. Same’s been true of whenever we spot around town one of the Texas Gentlemen, who’ve of late been serving as Bridges’ backing band. Then, just the other week at The War on Drugs’ show at the Granada Theater, a chance encounter with White Denim’s Austin Jenkins and former The Orbans bassist Cliff Wright brought more of the same — along with the reveal that, over at Fort Worth’s Shipping & Receiving venue, Jenkins and his bandmate Joshua Block had taken the reins of recording Bridges’ material, with Wright and others playing on it.

This morning, however, Bridges may have just received his most impressive cosign yet: The internationally revered and locally based Gorilla Vs. Bear blog, which doesn’t exactly go out of its way to champion locals, lavished Bridges with praise while debuting two newly recorded Bridges cuts that had quietly been posted to his Soundcloud page a few days back. As expected, these two tracks are damn-near-impeccable soul cuts that slice straight through the heartstrings.

So we’ll say it again: Dude’s going places, for sure.

Now, it seems, it’s just a matter of how quickly he’ll get there.

Give the below two cuts a listen — and, yes, download them while you still can — while pondering that. If it helps, take comfort in the fact that we’ll most likely still be doing just the same.