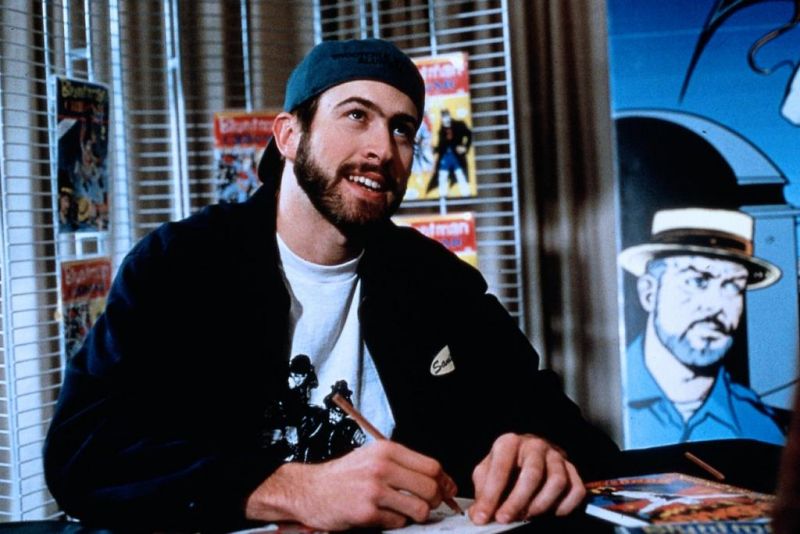 These Shows Are Your Best Bets For Running Into Jason Lee At This Weekend's Oaktopia Fest.

In case you've intentionally not been listening to your Denton friends in recent weeks, let us be the first to tell you that a new celebrity has recently moved into the college town.

After hinting about a possible move to the Little D back in February while he was in town at this year's Thin Line Festival to screen the Midlake documentary he directed, My Name is Earl star Jason Lee went and made good on his word just a few months later.

And, in short order, he's become a regular fixture around the town, helping open a new restaurant on the Square, celebrating his guest editorship of the current issue of Monster Children magazine with a party earlier last weekend at Harvest House and appearing in videos like the one above.

So, we can only expect that, when Denton's Oaktopia Fest returns for its third annual go-round this Friday through Sunday, Lee will join the likes of Michael Cera and Sinbad — two other notables we've been spotted hanging around Denton music fests of yore.

But at which of the festivals three outdoor stages and eight venues will Lee pop up? And which of the 125-or-so acts will he swing by to catch? That's anyone's guess.

Or is it? Rather than just highlighting a handful of this weekend's performers and calling them the fest's must see bands, we've decided to set your odds of scoring a selfie with the “Fever Dog” singer at any given time during Oaktopia III.

Here's where to keep your cell phones handy. Just be sure to get the dude in focus.

Kick-Off Double Feature: Almost Famous & Midlake: Live in Denton, TX.
When: Friday, 7-11 p.m.
Where: Travelstead Main Stage.
Odds 0:1.
Not only did Lee appear in and/or direct these two films, but fest organizers have already announced he'll be on hand for a Q&A at some point. So this one's a stone cold lock.

Kaela Sinclair.
When: Friday, 9 p.m.
Where: Harvest House.
Odds: 7:1.
Midlake drummer McKenzie Smith produced Sinclair's debut LP and is currently working on her second. Hey, there's always the chance they all slip out of the Almost Famous screening for a few minutes, right? We already know Lee's familiar with the Harvest House and Smith, at least.

Father.
When: Friday, 12 a.m.
Where: Hailey's Club.
Odds: 19:1.
Lee once said: “Music is something I listen to every day, I play guitar and I'm always fiddling about. I listen to everything from classic rock to John Coltrane to The Pixies to Hank Williams. It's a part of how I wake up in the morning and go to bed at night.” One genre he didn't mention? Hip-hop. But he can make up for that here.

Horse Thief.
When: Saturday, 5 p.m.
Where: Audacity Brew House Main Stage.
Odds: 1:4.
Though originally from Denton, the psych-rockers in Horse Thief have long since relocated to Oklahoma City, linked up with Midlake pals The Flaming Lips and signed to Bella Union — y'know, the label Midlake has released four albums on. We should also point out that Bella Union label head Simon Raymonde is pals with Lee, and is the one that initially introduced the actor to Midlake's music. We all know how that turned out.

Thundercat.
When: Saturday, 6 p.m.
Where: Travelstead Main Stage.
Odds: 3:2.
Aside from Midlake and Coltrane, Lee has shown an inclination towards forward-thinking musicians with chops for days. I'd say experimental jazz-leaning bassist Thundercat fits this bill to a T.

The Polyphonic Spree.
When: Saturday, 7 p.m.
Where: Audacity Brew House Main Stage.
Odds: 1:4.
Lee named his son Pilot Inspektor after the Grandaddy song “He's Simple, He's Dumb, He's the Pilot.” The Spree, you might recall, played its first-ever set 15 years ago while opening for Grandaddy. Jason Lytle's outfit later signed with The Spree's Good Records label, and the two have released split 7-inches since.

DJ Mom Jeans.
When: Saturday, 8 p.m.
Where: Travelstead Main Stage.
Odds: 1:7.
Sometimes known as Danny Masterson, the That '70s Show actor and Lee are old Scientology buddies dating back to the days before Lee left L.A.. Real friends show up to your DJ gigs.

Will Johnson.
When: Saturday, 8:30 p.m.
Where: Dan's Silverleaf.
Odds: 1:2.
When asked what he loves most about Denton, Lee responded “the people.” As far as people go, they don't get too much more “Denton” than ex-Centro-matic frontman Will Johnson.

Minus the Bear.
When: Saturday, 9 p.m.
Where: Audacity Brew House Main Stage.
Odds: 4:1.
Midlake's most recent album has been compared to Minus the Bear's sound. It stands to reason, anyway, that if you like one, you'd like the other. Maybe.

Daniel Markham.
When: Saturday, 10:30 p.m.
Where: Dan's Silverleaf.
Odds: 9:1.
Being the best band in Lee's new hometown has got to count for something, right?

Stardeath & White Dwarfs.
When: Sunday, 1:30 p.m.
Where: Audacity Brew House Main Stage.
Odds: 5:1.
Before sharing the stage last year at Good Records' annual Record Store Day shindig, Midlake and Stardeath also famously opened for The Flaming Lips in Denton at the 2010 version of NX35. Stardeath is also led by Dennis Coyne, nephew of The Lips' Wayne Coyne. The Lips was also an early influence/European tourmate of Midlake, so there's that.

Sarah Jaffe.
When: Sunday, 6:30 p.m.
Where: Travelstead Main Stage.
Odds: 1:3.
Midlake has taken Jaffe out on tour previously, so there's a greater-than-zero chance that Jaffe's already somewhat on Lee's radar, not to mention the national exposure she's earned on her own. The Midlake boys are always quick to sing Jaffe's praises in interview, and if Lee's anything like us, he'll be all the more likely to check out a band that a buddy has vouched for.

Edward Sharpe & the Magnetic Zeros.
When: Sunday, 8:30 p.m.
Where: Travelstead Main Stage.
Odds: 9:1.
Other than the fact that both hail from L.A., there's no real connection between these two. Still, what bearded, hat-wearing American male doesn't love them some Edward Sharpe?