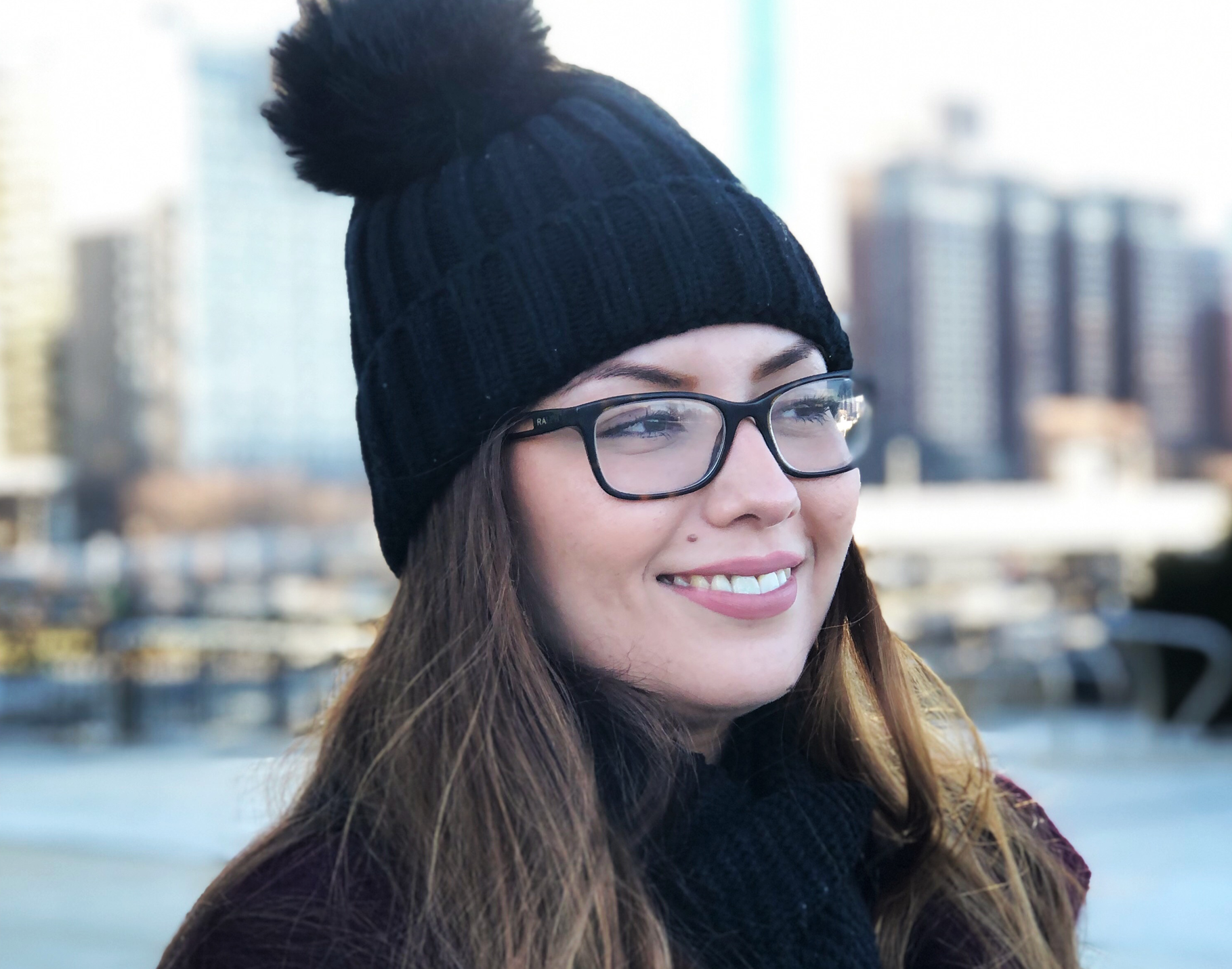 For Pasos For Oak Cliff Co-Founder Alejandra Zendejas, Reaching The Children Is Possible With Empathy, Care And Good Style.

When you’re a kid, that isn’t a hyperbolic statement — it’s a fact. Sneaker culture and the modern social media age all coalesce and pile onto the seemingly never-ending challenges of growing up. Add that to an economically disenfranchised background and you have a recipe for lower confidence, less motivation and ultimately poorer performances in school that don’t help to build healthy habits to ensure a student’s success in and out of the classroom.

However, Pasos for Oak Cliff aims to turn that around from the laces up.

Pasos for Oak Cliff is a non-profit started by Jesse Acosta and Alejandra Zendejas, two educators and sneaker collectors who understand that parents or guardians may not be able to afford basic necessities for their children, much less shoes that will help their confidence. Their aim is to help parents check at least one thing off their lists by providing sneakers for children in the Oak Cliff area.

Since August, Pasos for Oak Cliff has already given away more than 150 shoes since, earning them both local and national headlines, including a feature on The Drew Barrymore Show.

We caught up with co-founder Alejandra Zendejas to discuss Pasos for Oak Cliff’s serendipitous beginnings, the cultural and personal significance of sneaker culture and how this all affects students and their futures.

Hi Alejandra! From our understanding, Pasos for Oak Cliff has a pretty unique origin story.
The way it happened, it feels like a show — it was so weird! Our co-founder Jesse Acosta and I went to the University of Texas at Austin at the same time but we never met. In my last year at UT, I was president of my school’s LULAC organization which is heavily focused on civil rights for the Hispanic community be it health, immigration — things like that.

In our last year [of school], Jesse messaged me because he wanted to join. Of course, it was our last year at university so things got really busy and we never met. But, we still followed each other on Twitter. I saw him pop up on my timeline saying something about Oak Cliff — I knew he was from Dallas but I didn’t know he was from Oak Cliff specifically. We started talking about how we needed to get people more involved in Oak Cliff and how we needed to educate people on what was going on in politics and empower the community.

We both joined LULAC here in Dallas and we basically became friends after, and that’s how this all started. [Laughs] We met up for the first time in Bishop Arts and I asked him if he could give me a ride home and we happened to live on the same street but on opposite sides, three minutes away from each other.

What made you guys take the sneaker route as opposed to more traditional charitable methods like food and drives?
The culture here is very heavy on shoes, and that’s something that people pay attention to a lot, especially in high school. [Acosta] became a sneaker collector was around the time he began teaching at Kimball High School. It was a classic instance of when you go from being a kid that depends on their parents for money to getting that big boy/big girl job that allows you to buy whatever you want.

Kimball High School is in DISD and it’s pretty much in a low-income area. [Acosta] began to notice his students’ shoes more often, and he noticed that one student, in particular, wore the same worn-out shoes every day, so he wanted to gift them a new pair of shoes without offending them. 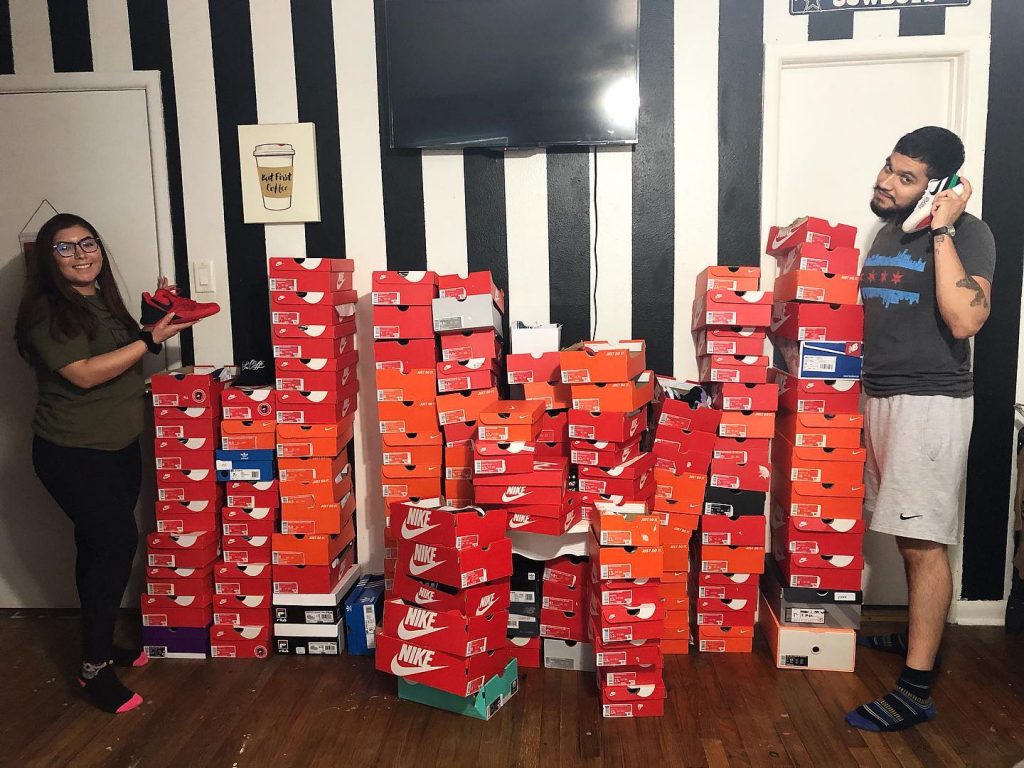 Zendejas and Acosta in front of their “shoe wall” before packaging and donating.

So, your love for sneakers brought you together for Pasos for Oak Cliff. How did you get into sneaker culture in the first place?
I think around [2012] I was into it a lot more. I didn’t know the whole world of sneakerheads. I knew sneakers through mostly my older sister and she was always into shoes. We were lucky enough to share the same foot size and we were able to both come to our parents and be like, “these shoes cost a little more but we’re both going to wear them.”

For me, it was important to find good shoes and a good deal because my parents couldn’t afford the brand new shoe that was coming out. So it wasn’t until high school that I started realizing that, “Oh wow, this is a whole thing.”

Ah, yeah. The KIXPO era.
I remember the first time I went to KIXPO with my high school friends and being like, “wow.” I couldn’t wait to be on their level and have my shoes out. I had a good amount of shoes compared to other people, but at these events, they had collections of shoes that resell for thousands of dollars.

Being there and seeing all these people with nice shoes I thought, “I’m probably wearing some super lame shoes compared to these people.” I remember things like that and I’m just imagining these kids at school feeling the way I felt, but worse.

New shoes, or just shoes in general, are seen as a status symbol for some students that come from working-class backgrounds. Statistics have shown that COVID-19 has disproportionately affected Black, Hispanic and lower-income families the most. Has this had an effect on the conception Pasos for Oak Cliff?
Come August, COVID was happening and [Acosta’s] students weren’t physically in his class anymore, but they would still reach out to him. Things were really bad around this time and his students were telling him “hey, my parents lost their job” or “we lost a family member.” That’s emotionally and financially stressful.

[Acosta said] we have to do this.” The only benefit of COVID was that we did everything online. Literally overnight he said, “what if we create a website, start a campaign and our goal can be 50 pairs of shoes. If we don’t meet that then we can see what we can do.” Shoes can’t cover a bill but they can help their confidence. 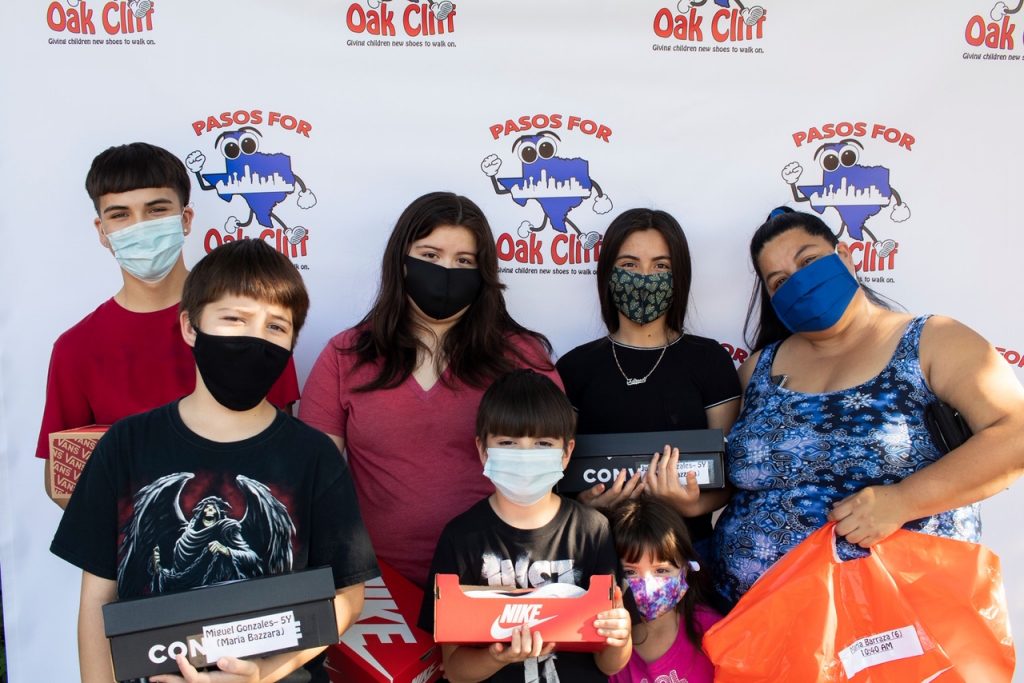 In a working-class family, there are different priorities like making sure you’re at work every day to provide and put food on the table. Shoes aren’t the most prioritized when you’re just trying to ensure survival. However, for a kid, a shoe is everything to them. How do shoes and confidence have a hand in educational performance?
When a student isn’t feeling their best, they don’t care about anything else. We don’t necessarily think that kids will get new shoes and start making good grades. But in terms of a classroom setting, if they already feel like they’re being judged or they don’t want the attention on them because of what they’re wearing, they’re less likely to participate or even focus. If they’re worried about getting bullied, not having friends, or just feeling a type of way, it affects their performance.

Of course, you can be shy and make good grades. But giving kids confidence and giving them the opportunity to develop not just professionally but also personally, I think that has a lot to do with what they decide to do after high school. If you’re not confident and you’re just there and don’t have determination or motivation to do anything, most times it doesn’t really set you up for success.

There’s that saying, “when you look good you feel good.”
Right. We really want to build that confidence. We want y’all to look good, feel good, but we want you to do more outside of that. Shoes are the first step and that’s how we decided on the name Pasos. We don’t want to just give kids shoes, we want to give Oak Cliff students the necessary steps to get where they want to be.

When I was growing up, I used to wear a uniform all throughout high school. So it kind of makes you feel like you’re just another student in school — shoes give you a sense of individuality.

You guys started in August, so it’s only been three months but you’re already making big waves. What’s been the most memorable part of this so far?
It kind of sucks that because of COVID, we can’t do all the things that we want to. But for our very first meeting, we put on our PPE and personally gave away shoes to 30 families and we were able to see some of the kids open their shoes, which was great.

You never know how some kids grew up or how they will react to things. [Acosta] was trying to fix the shoebox for a photo and one little girl moved her hand back and tried to take the shoes back from him. Her mom had to reassure her that we were never going to take the shoes away.

But, there was one family that was the last to pick up their shoes — a mom and her son. The son was older and a little shy. Older kids are harder to please so I was a little more nervous. The shoes we gave him were the Nike Air Force 1 with the red Swoosh, and once he unboxed them he smiled and gave a nod of approval like, “yeah, this is great.”

This conversation has been edited for clarity.