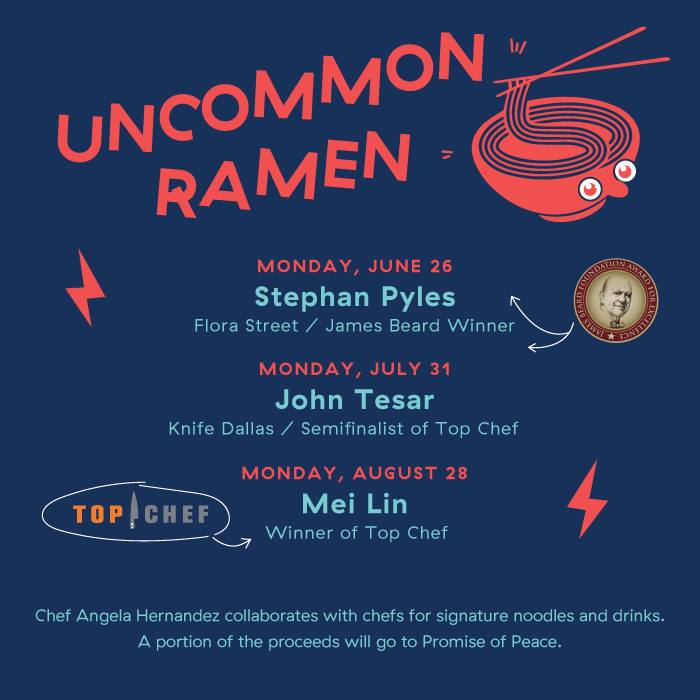 We’re turning up the heat for Summer 17’s Uncommon Ramen line up. Kicking off with Chef Stephan Pyles of Stephan Pyles Flora Street Cafe, these exclusive slurp sessions are not to be missed.

While menu details are still pending between Chef Angela Hernandez and Chef Pyles, you can expect to find special edition ramen, japadogs, and an exclusive drink pairing on the featured menu for the evening. A portion of the proceeds from these items will go to benefit local charity, Promise of Peace Gardens. Austin Eastciders will be on hand with commemorative pint glasses and deals on cider to help wash down your ramen.

Reservations are not required, they are encouraged. Walk-in guests will be accommodated on a first-come, first-serve basis and food quantities will be limited.

Chef Stephan Pyles:
Chef Pyles, a 5th generation Texan and founding father of Southwestern cuisine, was the first person in the Southwest to win a James Beard award. He has created 22 restaurants in 5 cities over the past 30 years and is the author of 4 critically acclaimed cookbooks. His most recent culinary endeavor, Flora Street Café, was named ‘Restaurant of the Year’ by D Magazine, The Dallas Morning News, and Texas Monthly Magazine, and was nominated for a James Beard Award. He also hosted 2 seasons of the Emmy-award winning PBS series, New Tastes from Texas.

Accompanying Chef Pyles will be his sous chef, Chef Josh Bonee. Chef Bonee joined Flora Street Café in 2016. He developed a passion in the culinary arena at 16 and has worked his way up at several high-end restaurants in California, Tennessee and Texas.